Molodri is a mixture of molasses and a fine grade of crushed fossils of microscopic, freshwater organisms which is a non-toxic, non-chemical control for parasitic burden. Used in Poultry, horses, sheep etc. At the same time digestion improves assisting in the metabolism of calcium and is rich in trace elements. Simply add powder to the rations at the rate of 2.5% or allowing a free choice selection in a separate feed container can result in noticeable improvements in bird health, feed efficiency and shell quality. Molodri can be safely fed to all ages and classes of poultry. Molodri relies on the action of the biogenic silica in the diatomaceous earth. It is certified within the BFA as an organic product.

Molodri lowers the fecal egg count in a flock's immediate environment, which means Molodri is an ally of a birds own immune system. It serves to reduce the numbers of those parasites that would attack a bird's immune system. The real value of Molodri is as a management tool to improve the sustainability of our poultry operation, in a non chemical, environmentaly friendly way. Another method of use has been free choice, where the Molodri is in a small container and the birds can eat what they require. Actual consumption proves to be highly variable, as the birds seem to require more at different times. Always store Molodri sealed, undercover and away from the sun.

MOLODRI IS NOT A COCCIDIOSIS TREATMENT, AND IS NOT EFFECTIVE AS A SHORT TERM TREATMENT OF ACTIVE DISEASE.

The natural control of coccidiosis and round worms relies on allowing the birds natural immune system to protect the bird. The difficulty with coccidiosis and worms is that the birds continually shed viable eggs from these parasites into the soil. The parasites survive well in the soil, and may live in the soil longer than the birds. The longer the birds are kept in the same location, and the greater the numbers kept, the higher the level of viable eggs of these parasites in the environment. This means a greater the challenge of these parasites to each new generation of birds. The higher the level of challenge the more likely the birds immune system will not cope with the challenge. When this happens we get active disease. Molodri is useful because it reduces the level of viable eggs of these parasites which are passed into the environment in the birds droppings, and so with time, reduces the level of viable eggs in the environment. In the case of birds in a new location, it reduces the build up of the parasites in the first instance. In addition, high levels of coccidiosis and worms may not themselves cause disease, but they increase the base load on the immune system so that a new disease threat will be the so called "straw that broke the camels back". This is why we so often see the veterinary diagnosis of worms or coccidiosis when other diseases are present, these parasites are often present when a new disease is the actual killer, and the parasites just weaken the system and attack the bird weakened by the new disease. So the real value of Molodri is as a management tool to improve the sustainability of our poultry operation, in a non chemical, environmentaly friendly way. Another method of use has been free choice, where the Molodri is in a small container and the birds can eat what they require. Actual consumption proves to be highly variable, as the birds seem to require more at different times.

Summary of the benefits of Molodri:

Nil withholding period deadly to parasites and insects (worms, beetle) and harmless to fish, animals, poultry or food can absorb up to one times its own weight in liquid and still appear dry the crushed diatoms scratch through the exoskeleton of parasites causing dehydration and death however does not damage host animal tissue use in feed will increase the bulk in food without adding weight anti-caking agent diatomite (from sedimentary rock) is made up of amorphous silica so it is non-carcinagenic. 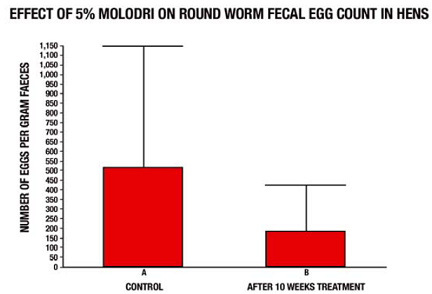 Figure above shows what happened to the number of parasitic worm eggs when 37 week old laying hens
were fed a standard diet supplemented with 5% Molodri over a 10 week period. 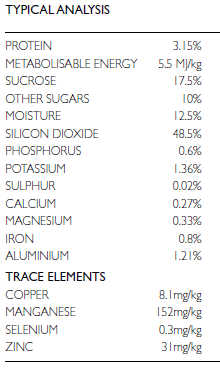