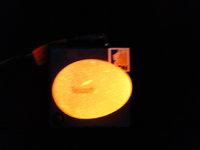 Why are we concerned about egg shell quality?  There are two main reasons.

Firstly, uniformity of shell density makes the task of incubation easier.  When all eggs have similar shells, then all loose weight at similar rates, and all breath about the same.

Secondly, shell densities have been shown with other avian species to have a direct relationship with fertility.  This has always worried me because I seems logical that overly porous shells should be more difficult to hatch but illogical that the outside cover of the egg should have anything to do with whether or not the sperm has united with the female egg cell on the side of the yolk.  So I have often commented on this apparent anomaly and explained it by the fact the eggs in the trials were all incubated for 10 days prior to examination for fertility.  A clear egg was assumed infertile whereas it may have been an early embryo mortality, is one where the chick did not commence development even though it was fertile. The conclusion I draw is that many shell problems are the result of metabolism so bad that the basic nutrition is abnormal not just the shell metabolism.

From my observations, I have come to the conclusion that there are several groups of birds making poor shells....
Immature birds.  These young birds seem to either lay the first number of eggs with poor shells and then come good, or sometimes persist throughout the season, producing good eggs in the next season.  However I am reluctant to always apply the problem as immaturity.  Many young females lay excellent eggs from the first egg onwards.

Research has shown however that the poor shell problem may be related to an inability of the breeding bird to properly mineralise the shell through insufficient Vitamin D3.  Mineralisation is used to describe the process of mobilisation of the calcium from diet, and bone stores, and redeposit the calcium in the correct FORM or MATRIX in the shell.  However additional vitamin D3 does not cure the problem.  This is where. the cause and effect gets a bit complicated.  Normal dietary D3 is similar to the normal D3 produced by the birds body in response to the sun.  However neither of these forms of D3 are the correct forms for mobilisation of the calcium for bones and shell.  So we will call these D3(a).  The scientific description is too long and unmemorable.  The D3(a) is absorbed from the digestive system and converted by the liver to another form of D3 which we will call D3(b).  But the D3(b) is still not what is needed so the kidneys convert the D3(b) into D3(c).  However to do this a special enzyme called 1hydroxylase is required.  Any reduction of this enzyme reduces the blood levels of D3(c) and the ability to mineralize shell and bone.  Now this enzyme appears to require Vitamin C for its production.  So low levels of vitamin C mean low levels of 1- hydroxylase and so low levels of Vitamin D3(c), and so poor bone and shell.

In birds, Vitamin C is manufactured in the kidneys and so is usually considered not necessary to be added to the diet. Vitamin C production may be influenced by many variables.  These are:

Genetics - some strains me be able to make more than others.

Disease - Infectious bronchitis is a common avian disease with little exterior symptoms in mild cases but with a great ability to permanently damage the kidneys.

Parasites - many worms directly effect the kidneys and their ability to function.

Excess salt in water or feed ties up the kidneys in the function of salt removal and so can reduce output of
Vitamin C.

Stress - This may cause the vitamin C output to be diverted to other functions.

Infection - Again the Vitamin C is diverted to other functions and so reduces availability for shell and bone development.  Infection in the oviduct is known to directly effect the shell quality by interfering with the mineralization site.  This is not what we are trying to counteract here, but any infection responds to additional vitamin C.

At this point, it is again useful to speculate about the interrelation of the shell density and infertility.  It is not reasonable to assume that if the bird is fighting stress, disease or permanent kidney dysfunction, the the B group vitamins which are essential for development of the embryo but are also essential for stress relief may also be diverted from the production of egg products and instead used for body survival.

A word of caution.  Vitamin C will effect bowel motility or speed of action.  This means large doses suddenly may give the bird problems particularly as the long bowel may be fast at one end and slow at the other.

We have introduced a program on a number of farms and have had mixed results.  Some chickens have shown a dramatic change in the quality of the shell, with others less dramatic a change.  It may be coincidence, as our trials are less than clinical.  However the initial results are very encouraging.

I am on record as being very strongly in favour of the use of beneficial bacteria with chicks, and enzyme treatment for adults. Is it not possible that as the production of enzymes is also a function of correct gut flora, and that incorrect gut flora has a part here?  So birds with incorrect gut flora will be more susceptible to shell problems.

In young chicks the ability to make Vitamin c is less than for adults.  In addition, the possibility that chicks will be under stress is also high, and in intensive conditions, the possibility of subclinical diseases is also high.  All these factors point to a possibility that bone mineralization problems with chicks, ie leg rotations, etc. may be related to this same mineralization process which is effecting the eggs, and so vitamin C may be of use with leg problems.

I have discussed this possibility that Vitamin C is implicated in the shell and bone problems with overseas specialists who also agree that there is likely to be something in the process.  However they caution that because there is no specific ostrich research on this matter we cannot assume that the processes will be exactly the same with the same significance.
I agree with the reservation, but the reason I am willing to publish this material is because I have been able to achieve improvement is enough cases to risk the recommendation.

A suggested program would be to use Solvita over 5 days, then 5 day break, then 10 days. However use caution with dosage of vitamins, to allow the bird to get used to the increased bowel speed.

This should see an improvement if there is to be one.